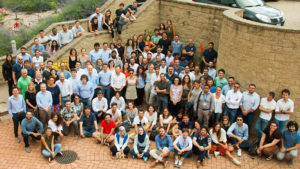 The BioRobotics Institute was specifically created to host the research activities of SSSA at the cutting edge of the most important sectors of interdisciplinary engineering-oriented technological innovation. The Institute has built a wealth of knowledge and expertise in several fields of biorobotics and bionics, such as: medical robotics, wearable technologies, collaborative robotics, bio-inspired robotics, neuroscience robotics, rehabilitation robotics and implantable technologies.
The Institute promotes the internationalization of didactics and scientific research through the collaboration with the most prestigious international knowledge centres. The Institute aims to educate engineers that are scientists, inventors, entrepreneurs and problem solvers.
The Director of the BioRobotics Institute is Christian Cipriani and it includes over 200 persons, including PhD students, Post-Doc researchers, and 17 Faculty members leading 9 Research Areas and 8 Laboratories. Recently, The BioRobotics Institute has been ranked first among all departments of biomedical engineering, in Italy, according to the Italian University and Research Evaluation Agency (ANVUR).

Watch the official video of The BioRobotics Institute.

Within the Institute, Prof. Leonardo Ricotti coordinates the Regenerative Technologies Laboratory. The research mission of the Lab is grounded on a strongly interdisciplinary approach and on the hypothesis that a properly driven cross-fertilization between mechatronics, materials science, nanotechnology and molecular biology can produce a dramatic improvement of targeted and minimally invasive therapies, enabling an important leap of several medical treatments. Such mission fully matches the ADMAIORA objectives.

ROLE IN THE ADMAIORA PROJECT

The BioRobotics Institute possesses outstanding records of publications and patents, and it performs high-level interdisciplinary research in the bioengineering field. Within the Institute, the specific research group who has generated the ADMAIORA proposal developed 10 international patents and has been or is still involved in several international projects and cooperations. The coordination activities of the Institute and in general of SSSA have been always very smooth and effective. Since the year 2002, SSSA has grown an administrative department specialized in the management of European Projects of the 5th, 6th and 7th Framework Programs, and now approached the Horizon 2020 Framework, with several projects already started in which SSSA is the Coordinator or a partner. Such know-how guarantees that the ADMAIORA coordination activity will be administratively smooth, yet scientifically effective.